The Upper Tennessee River Roundtable formed a Keep America Beautiful affiliate in 2007, called Keep Southwest Virginia Beautiful. The formation of this affiliate resulted from a unique partnership among nine counties and two cities. These localities joined to serve on a Black Diamond RC&D task force for a year and then became the Roundtable’s Tourism and Trash Team. After working on many projects together, the group decided to form a KAB affiliate, which was certified April 21, 2007. The affiliate won state and national awards for its litter prevention work in 2007.

To engage individuals in Southwest Virginia to take greater responsibility for improving their community environment.

KSVB follows a practical approach based on the Keep America Beautiful (KAB) system of behavioral change that unites citizens, businesses and government to find solutions that advance core issues of preventing litter, reducing waste and beautifying communities. This work is done as a region. Members will assist each other when possible with dumpsite cleanups, special projects, educational awareness, promoting litter enforcement, etc.

KSVB is a regional affiliate as a certified member of KAB. Upon certification with KAB, KSVB consisted of nine counties and two cities: Buchanan, Dickenson, Lee, Russell, Scott, Smyth, Tazewell, Washington, Wise Counties, and Bristol and Norton Cities. Each of these localities will appoint a member to serve on the KSVB Board of Directors.

Additionally, the KSVB Board will have two seats for representatives from towns that are members of KSVB and that are physically located within the nine counties listed above. If more than two towns become members of KSVB, then those towns that wish to appoint a representative to the board will apply to KSVB each year. KSVB will then select the two towns that will serve on the board for that particular year. The board will have no more than a total of 13 seats.

Each representative will serve as a board member for their respective locality for a one-year term, which may be renewed on a continual basis and will have full voting rights. This representative will serve on the Board of Directors for KSVB. The County/City appointment shall be by letter sent to KSVB Coordinator, P.O. Box 2359, Abingdon, VA 24212. KSVB shall recommend to the member localities that its representatives, when possible, should be an employee or employees who serve in a litter prevention capacity. A board member may give his vote by proxy, if unable to attend a meeting. 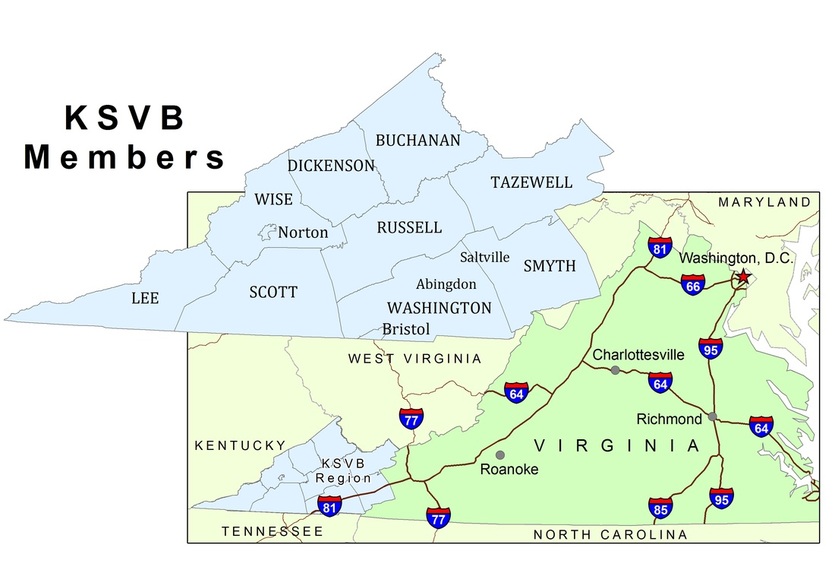